In celebration of Ada Lovelace, nearly two thousand bloggers have signed up to a pledge to blog about women in technology.

She is mainly known for having written a description of Charles Babbage's early mechanical general-purpose computer, the analytical engine. She is today appreciated as the "first programmer" since she was writing programs—that is, manipulating symbols according to rules—for a machine that Babbage had not yet built. She also foresaw the capability of computers to go beyond mere calculating or number-crunching while others, including Babbage himself, focused only on these capabilities.

There is a big list of women computer scientists on Wikipedia, so it was difficult to choose, but I have chosen Wendy Hall, Professor of Computing Science at the University of Southampton, because I have actually seen her give a keynote at a conference.

She is also a founding director of the Web Science Research Initiative, and is interested in human-computer interaction: 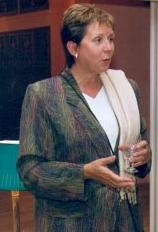 The UK Fawcett Campaign for equality between men and women named her as an Inspiring Woman in 2005, and the UK Research Centre for Women in Science, Engineering and Technology selected her as one of six world-class Women of Outstanding Achievement in SET in March 2006. In October 2006 she was the first non-US woman to receive the Anita Borg Award for Technical Leadership.

She is particularly prominent as a strong and vocal advocate for women’s opportunities in SET and for the need to ensure that girls are not excluded from participation in science and engineering careers. In her research and her public life she has sought to ensure that women are equal beneficiaries of technological advance, and her example of achievement and dedication has made her a distinguished role model for women.

You can read about more women in technology at the Ada Lovelace Day Collection.

All the currently registered posts can be seen: