Work has been super busy the past few weeks! Firstly, following International Women´s Day, there were two weeks full of events for the He for She campaign - a global gender equality campaign. My first event with CECASEM was at one of these where we had a stall at an event, giving information about the work we do. I was pretty excited to finally get out the office, however my dreams were rapidly crushed as the weather was crap and we spent the entirety of the day holding down flyers and signs and holding umbrellas over the screen.

I have had an exciting opportunity to lead the creation of a partnership with Always, the feminine hygiene company. They have previously held awesome campaigns such as "Like a Girl" and do a lot of international development work, improving access to feminine hygiene. There are a lot of parallels between our visions and I´m super excited about working with them! 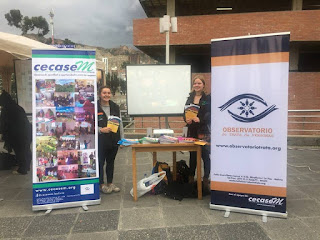 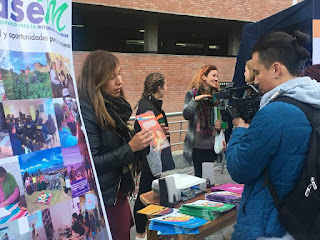 In one of our attempts to fully embrace Latin American delights, we went to salsa class. It was really fun but just not for me! Instead I have joined a football team, which I am definitely no better at but I much prefer it!

Two-monthiversary. Time is flyiiiiiing! To celebrate, Ella, Fats and I embraced the rare amazing weather and bought snacks and a bottle of vino and had a picnic in the park. It was delightful! We then made dinner together at Ella´s, went to Luciano´s house, but then had a reasonably early night in preparation for a walk the following day.

I say walk, we were fooled into thinking it was going to be a pleasant Sunday stroll, it was not. Ella and I arrived and everyone was head-to-toe in professional hiking gear. At this point, we decided that it could be for one of two reasons: A) It was an all the gear, no idea kind of situation, or B) They were all seasoned hikers, fully equipped for a giant hike. Obviously it was the latter. After driving for two hours, we started the walk and after a tough hour or so hike we arrived at a lake. At this point (already exhausted) we were still blissfully unaware of what was to come. Then Maggie pointed to some ridiculously distant peak (pretty sure it was above the clouds) and said "oh we´re actually going up there guys". Anyway, after 5 long exhausting hours, we finally reached the summit at 5,350m! The views were absolutely breathtaking (or that may have been the altitude), although I´m still undecided if they were worth nearly dying for. Lesson learnt: When Maggie invites us on a walk, it´s nonsense and were not fit enough. 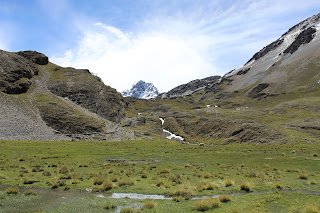 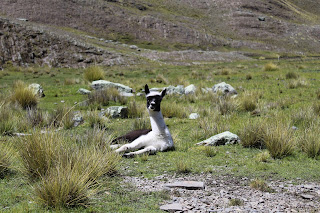 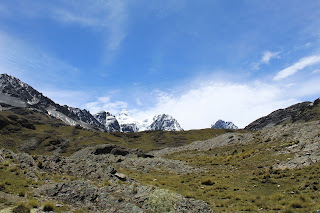 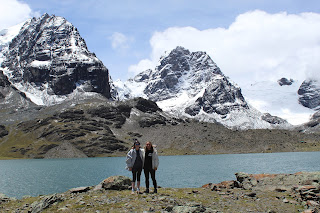 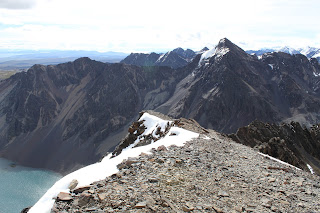 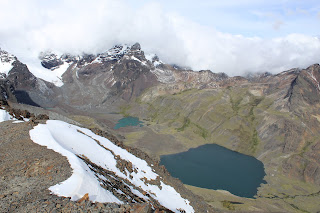 For Semana Santa (Easter) we had a three day weekend so took the opportunity to travel! We went to a beautiful place between Cochabamba and Santa Cruz called Villa Tunari. We spent the days visiting national parks with lots of wildlife! One particular highlight was in Parque Jungla, where there was a whole host of activities, including a sketchy 20 metre high swing. You start by climbing up a (pretty rusty) free standing metal frame with a wee trap door to a wooden platform at the top. On hauling yourself through that you´re met by a small 12 year old boy who stands you at the very edge of the platform, helps you on to the swing (a wooden plank on a rope), puts in place some very questionable safety measures (a rope around your arms - purpose? who knows), whips the stick that is stopping you from falling off the edge away, and sends you on your merry way. And merry it certainly was!!

Oh, and our hostel was wonderful.

Is three egg sangas for brekko an overkill?

No. Ella and I had the time of our lives at the market in Villa Tunari, polishing off two or three egg sangas (our one true loves) for breakfast, followed by more eggs for lunch and dinner. It was an eggy weekend, arguably too much so.

On arriving back to La Paz the following day, my first bout of dodgy tum commenced (not willing to accept it was due to the plethora of eggs I consumed). It was not fun, and I really thought death was nigh at one point. But if I learnt anything, it was that I have an impeccable ability to time my vomits to the most convenient places possible, narrowly missing throwing up on the bus on two occasions. 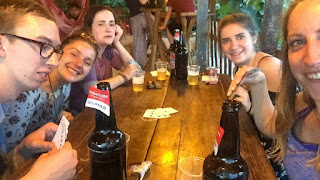 Ella and I are now the proud owners/parents to a wonderful cacao pod, Susan. We have taken on the challenge to turn her into a yummy chocco bar. Not having the foggiest how to actually do so, our first port of call was the trusty old google, where we came across some very unhelpful websites. Departing naff wisdom of the likes "use expert advice to determine if your pod is ripe" and "separate the good and the bad beans" without giving the slightest indication to the respective characteristics of such beans. Assuming she was ripe and that she could only possibly contain good beans, we popped her open and put her (rather grim looking) insides in a tubberware for stage one of the chocco making process- fermentation. I´ll be sure to give an update of our adventures with Susan next time. 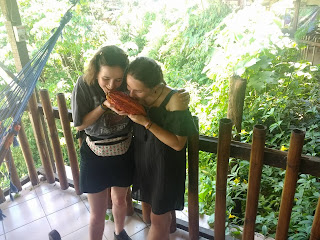 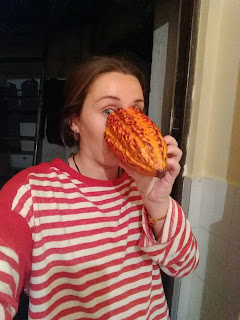 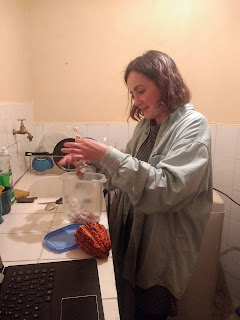