My Placement in Italy: the Highs & the Lows

So here we are: five months have been and gone, and the first part of my year abroad is over. It’s been such an amazing experience, one that I would recommend to everyone, but it’s also been much harder than I’d ever imagined and I’ve learnt so much from it as a result.

I think it's really important that we talk about all sides of the year abroad - the exciting, the overwhelming, the difficult, and the downright terrifying - not just to give future students a more realistic expectation of the experience, but also to reassure current placement students who may look at other people's highlight reels on Instagram and feel as though they're doing something wrong.

So, I've decided to write about my full experience of working in Italy - the highs and the lows, and also the things I might have done differently.

During my time in Italy, I worked as an administrative intern for an Italian language school with sites in both Sestri Levante (Liguria) and Florence. I found this placement through Moodle, as the school regularly employs Bath students each year thanks to a connection with the PoLIS faculty. The premise of the placement is to spend the morning in language classes with fellow students, and then to spend the afternoon working in the office.

I was lucky enough to spend time in both of the school's sites, and my experiences in Sestri Levante and Florence were both very different. My principal role in Sestri was to assist the school's director, whereas in Florence I had many more responsibilities and set tasks.

In Sestri my routine changed daily, and I could be doing anything from sending marketing emails to escorting new students to their accommodation. Everything was very relaxed and my hours were hugely flexible.

In Florence there was more of an established routine, but I still had a certain amount of flexibility (it is Italy after all!) Each week I had administrative duties to complete, such as sending regular emails to students, and I also helped with the school's social media pages and blog, for example researching the events going on in Florence each month.

WHAT I'D DO DIFFERENTLY 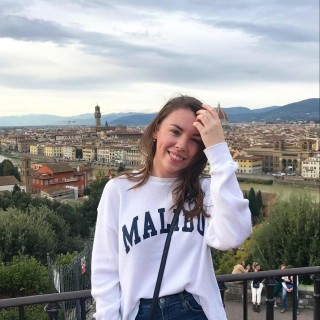 All in all, I feel so lucky to have worked and lived in Italy and it was a truly invaluable experience, not just for the improved language skills but also for gaining independence, stepping outside of my comfort zone and learning more about myself. It was in no way easy, but it's not supposed to be! The year abroad is an emotional rollercoaster, and there will be many ups and downs, but it's all 100% worth it.